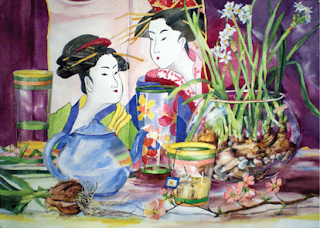 City Gallery's first solo exhibition "Magical Realism" by gallery member Gina Clapp will run from April 3- April 25 2010.  Clapp will exhibit new work and will awe visitors with her mastery of watercolor. Clapp searches for and finds magic.
The term "Reality" mystifies Clapp. She sees reality as ever-changing, fluid yet fleeting and ephemeral. In "Magical Realism" she tries to focus intensely on what she sees and her work attempts to communicate her vision. "I am trying to catch a split second in time. I want to portray the movement in a still object, a kind of vibration that living materials have, as well as their inherent stillness. Drapery may feel like it is swirling, blowing, or hiding something. Pots and jars seem to tilt just slightly when I draw, as if they are shifting their weight. And the minute I think I have captured the moment it slips away".
What Clapp sees is different from what most people see, even if the object is familiar. The observer looking at Clapp's work will enter into a magical world where egg yokes become landscapes, sequined fabric is the shimmer of light on water, and flowers seem on the verge of shifting their bodies, slipping or flying away. In this world no object is unworthy of inclusion. The ordinary green plastic garden pot has the same potential to reflect, glow and shimmer as a more precious item.

The opening reception will be Saturday, April 10 from 6PM to 9PM.


Additional information may be found at: www.citygallerydc.com For further information or images, please contact the gallery at 202.468.5277 or info@citygallery.com.
City Gallery is located at 804 H ST NE second floor, Washington, DC 20002. Gallery hours are Fridays and Saturday 1-5pm.
Posted by Philip Hutinet at 3:38 PM