Rosetta DeBerardinis will be holding an artist talk this Saturday, April 17 at 7PM at the Corner Art Store. 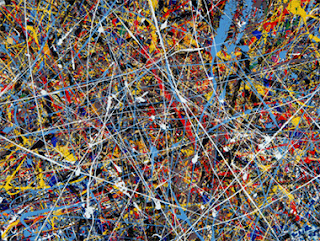 Born and raised in New York City, visual artist Rosetta DeBerardinis is completing her final year of residency at School 33 Art Center in Baltimore. Upon its completion she plans to return to DC where she will continue to create large abstract paintings, urban drawings and mixed media sculptures. Her work has been exhibited and sold at commercial galleries and art venues throughout the United States and in China, India, Croatia and Japan. Her museum credentials include The Corcoran Gallery of Art, The Dallas Women’s Museum, and the City Museum of Varazdin in Croatia and the African American Museum in Dallas. In 2003, she was nominated by art critic Barbara Rose, David Rubin and other jurors to represent the United States as a lifetime member on its team for the Florence, Italy Biennale.
DeBerardinis uses color as a material. Her work is a culmination of abstract expressionism, gestural, action painting and color field. Creating work up to 9 feet in height she does not fear the blank canvas nor is she intimidated by its large spatial plane. Using various tools and instruments to apply pigment; her gloved hand is her most tool.
For the past decade, DeBerardinis has worked hard to build her artistic credentials but also remains an organized and detailed business woman. She teaches marketing and businesses classes to artists under her subsidiary, ‘Beyond the Easel’. She has taught under the auspices of Art Exposure, the Warehouse Gallery, and Lucinda Gallery and for the Black Artists of D.C. She led guided tours on a monthly basis during gallery openings in the District of Columbia and Bethesda, Maryland for five years. In 2007, Liquitex, the original manufacturer of acrylic paint awarded her Artist of the Month: January, for her creative use of the pigment. DeBerardinis has been featured in several magazines, newspapers, blogs, U-tube interviews and gallery and museum catalogues, including the book Thinking About Art.
DeBerardinis received her undergraduate degree from Vassar College, a master’s from the University of the District of Columbia and a juris doctorate from the University Of Baltimore School Of Law. She has also completed coursework at Rice University, Fashion Institute of Technology and The London School of Social Research. Her interest in art began at age five when she was enrolled in the Saturday art program at Pratt Institute in New York City.
The Corner Art Store is located at 900 South Carolina Ave, SE Washington DC 20003.  For more information call 202.544.5807, email: swantelier@earthlink.net or visit www.cornerstorearts.org/
Posted by Philip Hutinet at 10:57 AM