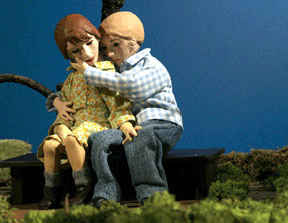 I Choose Darkness realizes the possibilities of stop-motion animation and puppetry to gratify and reflect on social interaction, sexual repression, and the manipulation of narrative. The show, composed of three films, and drawings. The final film, Marie finished just weeks ago, I Choose Darkness and Enough to Drive You Mad  were completed in 2009.

The series appropriates characters and narrative from Robert Bresson’s 1966 film Au Hasard Balthazar. Yasinsky’s handmade figures and sketchy animation naturally mirrors Bresson’s own tenet of filmmaking. Casting people without experience and coaching them to remove all evidence of acting, Bresson made films that rely on scenery, movement and sound for emotional maneuvering. Yasinsky investigates this through her use of figurines with restricted movements and drawings that rely on the shifting of lines for animation. She develops enigmatic renderings, where we are left to solicit meaning from inside ourselves.

In the film I Choose Darkness, Yasinsky depicts Bresson’s characters, Marie the young protagonist, Balthazar the donkey, and Girard the abusive lover as puppet figurines, experiencing a shifted storyline. The stop animation creates a choppy unnerving atmosphere with the figurines moving stiffly within it. The characters undergo experiences like kissing, dancing, and fighting, but their faces remain frozen and give up zero emotional interpretation. The shifting background becomes a major character for the donkey Balthazar. Enough to Drive You Mad follows as a quirky antidote to I Choose Darkness and introduces Mr. Magoo as a supporting character who dances around the screen and spits red dots.

Yasinsky’s latest film, Marie is animated by vibrating and fluctuating line work and the occasional pseudo-pixilation of the image. Bresson’s source frame periodically fades in and out. The work is punctuated by the collapse of traditional music into harsh digital sounds and reveals perspectives on the character and filmic malfunction.

Yasinsky received a BA from Duke University in 1988 and a MFA from Yale University School of Art in 1992. In 2010 she received the Baker Artist Award at the Baltimore Museum of Art and a fellowship from the American Academy in Rome, and is a finalist for the Sondheim Prize.  Yasinsky’s works have been exhibited extensively both nationally and internationally.  A selection includes the Baltimore Museum of Art, at The Sculpture Center in Long Island City, PS1 Contemporary Art Center, Spreuth Magers Projekte, Wexner Center for the Arts in Columbus, Ohio, and the UCLA Hammer museum among others.